This article originally appeared in The Fabricator and has been republished here with the author’s permission.

I was extremely fortunate to start my manufacturing career as part of a plant startup team for Yamaha Motor Manufacturing. It was Yamaha Motor’s first U.S. plant.

As part of that startup, my peers and I were sent to Iwata, Japan, Yamaha’s world headquarters, for 13 weeks of training. A large part of that training consisted of learning how the Japanese run their manufacturing operations. That operations approach can be summed up in one word: lean.

It was during that trip that I first heard the word kaizen. My Japanese trainers patiently explained its meaning and how it was an integral part of the way they run their business.

Yamaha, through “The Yamaha Production System” (sound familiar?), was dedicated to the pursuit of continuous improvement by all people at all levels. The Japanese made it clear to me that, as a first line supervisor, my first priority was to keep my department running efficiently, and my second priority was to train and lead continuous improvement activities. Even though the plant was brand-new, many small, often daily improvements were made.

What was not explained to me was that kaizen is a series of events that take several days and large amounts of resources to complete. But that’s not how Yamaha management viewed it. At least from their perspective, kaizens are small, daily improvements. Meanwhile, kaizen in the U.S. has grown much larger in scope.

To be critical of kaizen events might result in some American manufacturing professionals calling me a heretic. However, I have seen kaizen activities, which produce small and steady progress on a daily basis, outperform kaizen events over the past 20 years. Let me tell you why.

Operating lean is a cultural change. It requires change at all levels in all departments of an organization. For that cultural change to occur, you need widespread participation in improvement activities.

Kaizen activities can and should be completed daily. Consider these three huge improvements that were made after brief kaizen meetings:

The design of a fixture table used for holding 2- by 2-in. square tubing in place as it was welded to create a frame had locating stops and pins that required the welder to manually tighten 10 large C-clamps. A brief kaizen activity resulted in the C-clamps being replaced with toggle clamps. It only took a couple of hours to make the improvement, but the setup time dropped by 60 percent. It was also a great ergonomic improvement.
In another example involving a fixture for a medium-sized weldment, a welder was having problems flipping the fixture as it got heavier with every piece he welded onto the assembly. During a kaizen activity, a co-worker suggested mounting the weldment to an engine stand. One was purchased for $250, and the welder was able to rotate the weldment easily from one side to the other.

At a fabricating facility, it was noticed that steel trucks tended to back up in the parking lot as the day went on. Some days the company was paying several workers overtime to stay and unload trucks that should have been unloaded during the normally scheduled first shift. A brief discussion with the supervisor and a material handler resulted in an instant analysis of the warehouse.

After watching the trucks being unloaded, the group determined not all of them had to be unloaded via crane; forklifts could unload some. The ones that could be handled by forklift could be unloaded more quickly by using several forklifts at once. An unload schedule was created that identified each truck as a crane unload or forklift unload. Each truck was given a specific time to arrive at the warehouse. When it came time to unload a truck, a minimum of two forklifts were scheduled to be there to unload them. The forklift-unload trucks were generally unloaded in about 15 minutes compared to a truck requiring crane unloading, which averaged 45 minutes. The overtime was eliminated after the kaizen activity. 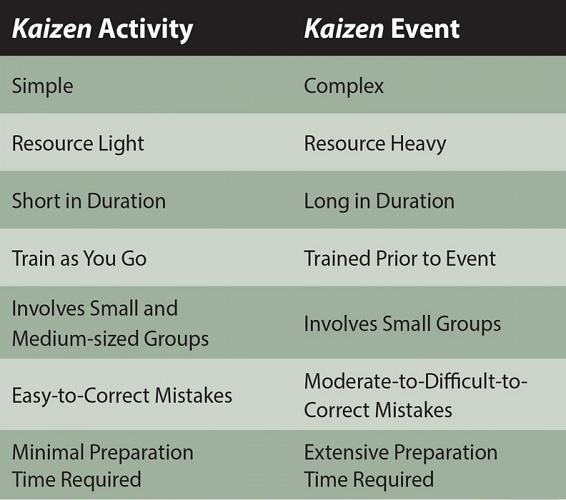 The chart above is a side-by-side comparison of kaizen activities and kaizen events. It is not meant to be a judgment of which is better; it simply compares the traits and what is necessary to execute the two methodologies in a typical manufacturing environment.

These kaizen activities have a cumulative effect that builds over time into large-scale improvements.

Don’t get me wrong, kaizen events are sometimes necessary, but generally only when you are making large systematic changes. Kaizen events tend to involve a relatively small group of people, usually subject-matter experts and those with the power to approve changes. Yes, they are normally cross-functional teams, which is good, but they also tend to be heavily laden with engineers and other front-office professionals. Operators may feel a bit intimidated if they are on a team in which the majority of members aren’t their peers. You want them to feel comfortable and understand their opinions and suggestions are vital to the success of the kaizen.

Conversely, kaizen activities should be led by shop floor operators assisted by their supervisors and managers. Lean is successful only when all people at all levels are actively and continuously leading improvement efforts.

There is another aspect of kaizen events that many people don’t want to talk about, often keeping it in the dark shadows: What if the kaizen event isn’t successful? Most manufacturing leaders were taught sometime in their careers that they shouldn’t plan for failure. This is a solid credo, but at the same time a manufacturing manager has to have an idea how an unsuccessful kaizen event will affect continuous improvement efforts moving forward.

Obviously, shop floor operators and senior staff watch kaizen events very carefully. They want to see how the new process works, and at the end they offer their judgment: Are changes for the better? If an event was unsuccessful but the company has conducted successful ones previously, then management shouldn’t be too concerned because employees understand. However, if a company is just beginning its lean journey, employees could become more skeptical and immediately doubt the benefits of any lean manufacturing exercises.

You want your continuous improvement efforts to build confidence and enthusiasm for continuing the lean manufacturing journey. Lost confidence can cross all levels and areas of an organization. For example, if a mechanical engineering manager had to support the kaizen event with one of his or her senior engineers for a week and the event wasn’t successful, the manager may be less willing to provide resources and set aside time for the next event. If a company had to schedule overtime to build stock to cover the time diverted to conducting the event, the controller may be less inclined to support future events. Kaizen events tend to be resource-dependent, and as such, if they aren’t successful, it may be more challenging to assemble those resources for the next one.

Quick and to the Point

Kaizen activities are generally simple and short in duration, which also means they require fewer resources. They are also quite often used as teaching opportunities.

For example, the “stand in a circle” technique is a good way to instruct others. You teach them the technique and let them identify improvement opportunities, and then they are released to go and act on those improvement ideas.

If an idea isn’t successful, then the teaching opportunity continues. Why didn’t the improvement idea work? What could have been done differently? Can a correction be made and turn the failure into a success? As kaizen activities are less complicated and shorter in duration than kaizen events, a failure associated with an unsuccessful activity won’t have the same negative overall impact as a failure linked to a large-scale event.

In the end, both kaizen activities and kaizen events are a necessary part of the fabric of successful manufacturing operations all over the world. Most organizations will conduct a combination of the two. What you and your company have to decide is where your emphasis will be—on activities or events. Both have their advantages and disadvantages. It’s just a question of which combination of the two will most quickly and successfully move the company forward in establishing a culture of continuous improvement.